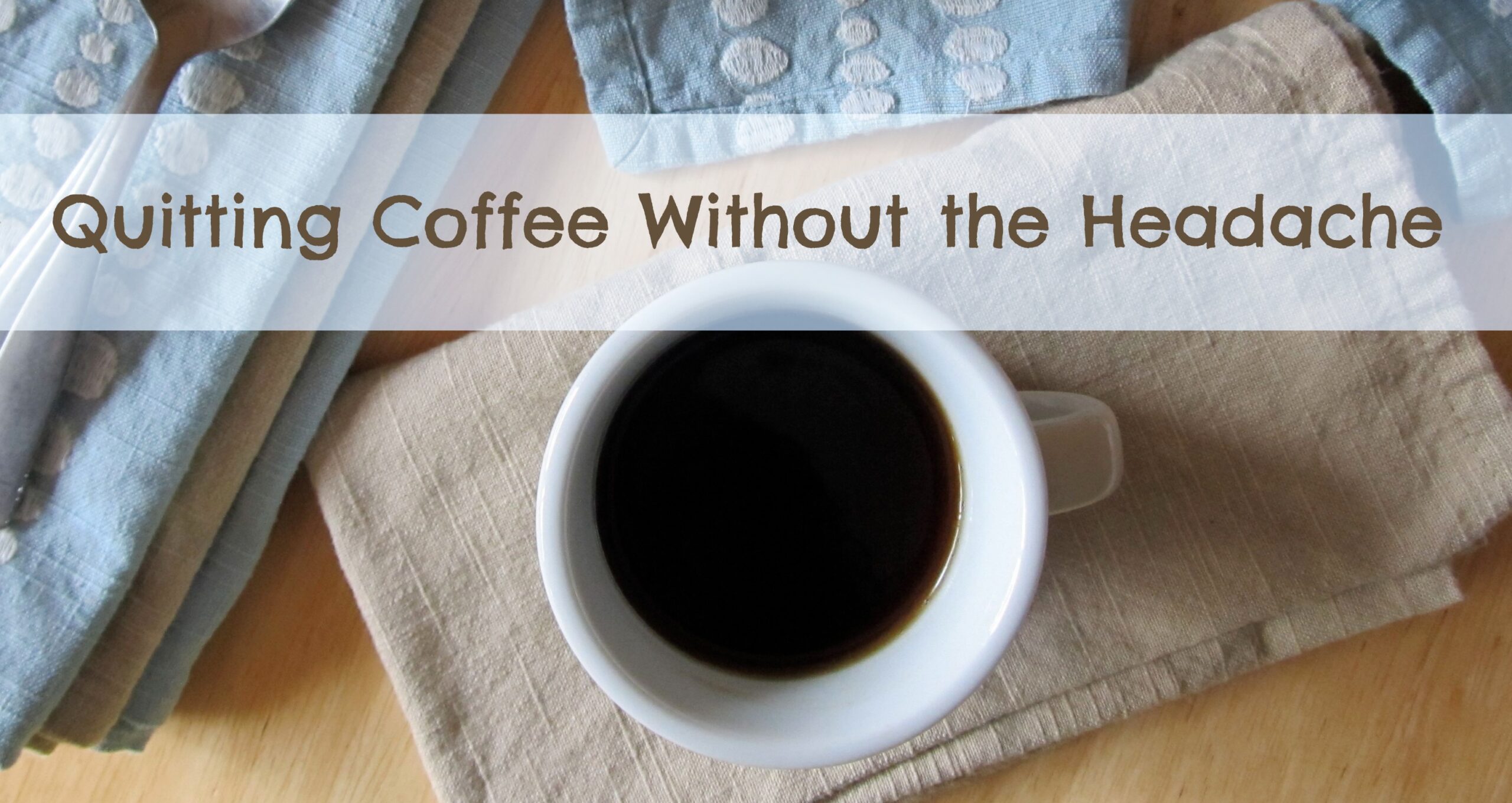 I love me some coffee. When I was 15, I decided to jump on the bandwagon with my father and older brother – and started drinking coffee. Black coffee. Because black coffee is strong. Just like me. Since then, I’ve had coffee almost every day – except for those times when I’ve felt compelled to drop caffeine for a while. Inevitably, I suffer for three straight days of headaches – the first I have a mind-numbing migraine, the second day it’s a bit less numbing, and by the third day I just have a dull ache that stays with me constantly. It’s all my body’s way of saying, “Hey, where the heck is the coffee?!”

The last time I quit coffee was when Denise was born, three years ago. I decided at the hospital that since I was going to be spending some time lolling about, simultaneously sleep-deprived and constantly seeking sleep, I should just give it a go. And it went pretty well! I was in such a newborn fog anyhow that I didn’t notice it that much. The result of quitting coffee? Well, amazingly, I had more energy! Even though I had quit coffee and had a newborn, I had an abundance of energy. I credit that with my obsession with coconut oil, probiotics, and letting go of my many cups of coffee each day. I would get up after Denise’s early morning feeding (around 4 or 5 am) and write until the rest of the house would start to stir. And I still had the energy to go through the whole day like normal. Isn’t that crazy? No coffee, and more energy.

So last week I decided to stop the coffee drinking again – but this time, I did a few key things that left me – amazingly – headache-free. Yes. I quit coffee, with no skull-numbing headache. No caffeine withdrawal symptoms. This is crazy, because just a few days before, I got a splitting headache from waiting too long to have my coffee. And now, one week after quitting coffee, I’m more energetic, my brain feels clearer, and I’m more alert. And that’s saying something for a mama with 4 kids under 7. Am I right?

I thought I’d list out those key things that I did that ended up keeping me feeling hale and hearty through the entire withdrawal process. I hadn’t planned on doing anything to quell the tide of withdrawal symptoms, so it’s all very unscientific – these are just things that I decided to do at the spur of the moment when the thought struck that it might be helpful – and then ended up doing more intentionally for the next few days when I realized that they were all working toward keeping me feeling great! And coffee-free.

It just so happened that the night before I quit coffee, I went to bed at a decent hour. And by the grace of God, the children slept in that next morning! Which meant that I had more rest than usual to start out the day, and I think this played a huge part in how good I felt through that first day. So I made a big effort to scale back those first few days, and took it easy.

Instead of my usual habit of getting the kettle ready for coffee first thing, I melted some coconut oil and did some oil pulling for 20 minutes. Oil pulling is a great way to remove toxins from your body – it pulls toxins into the oil, which is then spit out, which means those toxins are out as well. I knew that my awful headaches from quitting coffee before were a result of some sort of die-off, so I thought perhaps getting rid of some of those toxins might help out! I did oil pulling for 20 minutes for the first three days, rinsing my mouth out with salt water after.

After oil pulling, I squeezed a whole lemon into a pint glass then poured in filtered water. I drank three glasses like this the first day, and throughout the next few days. Now I start my day out with lemon water – it’s very energizing and super great for you! And I think it was key in helping me feel good during those first few days of quitting coffee – after all, lemon water contains absorbable magnesium and aids the body in detoxification.

Okay, so all of these things on my list, I am proud to say, were pulled from the stores of knowledge in my brain. I had learned these things from reputable sources at some point in the past few years, and I feel are relatively scientific. This one here, though, well…I will be honest. While watching a Duck Dynasty re-run a while ago where they were talking about feeling awful without coffee, good ole’ Uncle Sy mentioned that in ‘Nam the doctors gave them a shot of B12 and they felt great! Well, while I was making my Super Girl Smoothie that first morning, I remembered that little tidbit – and ended up putting in way more than my usual 1 tablespoon. I put in about 1/4 cup. And each day after that, I made sure to get at least a bit of nutritional yeast in.

I made sure to get plenty of living foods, especially during the first couple of days. The lemon water, Super Girl smoothie with beet kvass (which helps cleanse the liver), kombucha, and Lacto-fermented sauerkraut. Probiotics cleanse, energize, and aid in detoxification – which means they are a must for something like quitting coffee. You can also take a probiotic supplement if that is easier.

Coffee depletes magnesium from the body. I also knew from this post on magnesium deficiency that headaches were a cause of a lack of magnesium, so in the middle of the first day, I slathered on some magnesium oil – this is a great way to get easily absorbable magnesium. I could tell that I had a deficiency because it stung a bit, but I just sat and watched television for twenty minutes while it soaked in and then took a shower. If you haven’t put magnesium oil on before – be careful – if you’re very deficient, then it can sting really badly. If you need a gentle alternative, take a bath with Epsom salts or magnesium flakes. I only did this the first day, but I think it was a huge factor in my headache-free coffee withdrawal period.

Each day I’ve been surprised at how great I’ve felt giving up coffee! And who would have thought it would be this easy? As crazy as it seems, taking care of my body by nourishing it and resting enough really did make a difference in my body’s ability to handle the usual stress of giving up my coffee addiction!

Have you every given up coffee, or do you plan to?

10 (Non-Food) Ways to Use Coconut Oil

5 Simple Ways to Jumpstart Your Health

No comments to show.